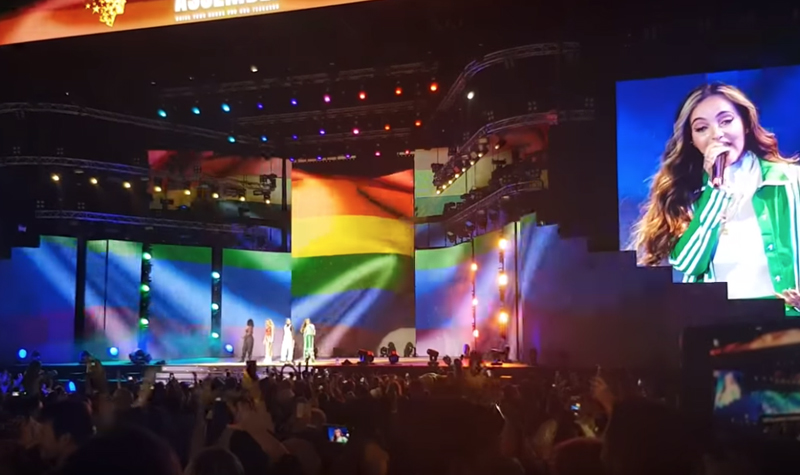 Little Mix mixed things up big time during the all-star concert to celebrate the Global Teacher Prize The Assembly in Dubai on Saturday, March 23.

The massively popular British girl group took the stage and during a performance of their hit “Secret Love Song, Pt. II,” a massive rainbow Pride flag appeared on the stage’s screen.

It’s no secret that the LGBTQ community face discrimination in the country, with federal law dictating that gay sex between men or “sodomy with a male” is punishable by death. However, as PinkNews points out, “executions of gay people are not carried out.” They do, still, face imprisonment.

The band, comprised of Perrie Edwards, Jade Thirlwall, Jesy Nelson, and Leigh-Anne Pinnock, was clearly out to make a statement, and audience members and fans took notice.

The song they performed has become something of an anthem among their gay fans and is actually a bonus track from their 2015 album, Get Weird.

The original version of the Little Mix song, featuring Jason Derulo, was titled simply “Secret Love Song.” Part of the lyrics of the song say, “Why can’t I hold you in the street? Why can’t I kiss you on the dance floor? I wish that it could be like that, why can’t it be like that? ‘Cause I’m yours.” It paints a picture of a forbidden relationship, one tabooed by circumstance and society – an all-too-real reality that members of the LGBTQ community (no matter their country) understand implicitly.

Have you seen the music video for Little Mix’s ‘Secret Love Song’?

You’ve been enchanted by the Little Mix black magic