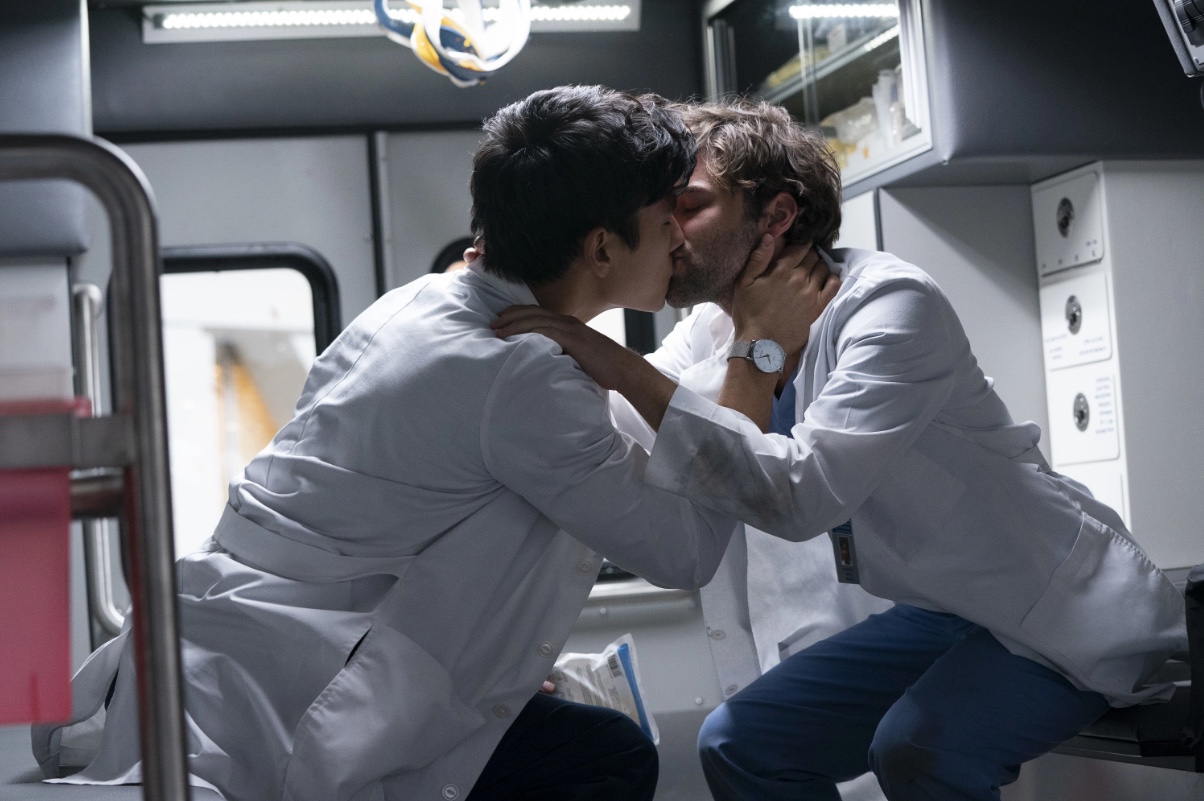 Grey’s Anatomy season 15 is back tonight. Picking up right from where the fall finale left off, there’s a hell of a lot going on with all of the doctors at Grey Sloan Memorial. But there are only two in particular that we really care about.

If you’re not caught up on all of the #Schmico drama, then sit back, relax, and let me take you on a brief recap.

All the way back in episode 1, “With a Wonder and a Wild Desire,” we’re first introduced to Nico, who’s an ortho surgical fellow at the hospital. He, along with Dr. Lincoln (Chris Carmack), arrived in the ER to consult on a case that Levi was part of.

Later on during a surgery, Nico and Levi lock eyes. The dreamy Dr. Kim winks at the unsuspecting intern, which flusters him, causing him to drop a basin.

Near the end of episode 2, “Broken Together,” Levi is with Jo (Camilla Luddington) and Taryn (Jaicy Elliot) at the bar across the street. Nico sits down beside Levi and hands him a beer as recognition for Levi’s intense day. Levi wants to pay him back and even reaches for his wallet, but Nico puts his hand on him and tells him he “can get the next one.” Nico gets up to leave while Levi, surprised like all of us, stares.

Episode 3, “Gut Feeling,” is where things really start to get… heated. While Levi is in the intern’s locker room at the end of the day, Nico walks in and immediately starts taking off his scrub top, saying, “Great, showers in here.”

“Fellows have a lounge on three,” Levi tells him.

“Are you kicking me out?” Nico asks.

“No,” Levi mutters, glancing down briefly at Nico’s exposed body.

In episode 5, “Everyday Angel,” after Nico tells Levi that he owes him a drink, suggesting the two meet tonight. Levi turns him down, citing some dumb excuse, and Nico says he’ll be at Joe’s anyway. Taryn overhears the exchange and tells Levi that he turned down a date. Levi was surprised because up until then, he seemingly hadn’t thought of their interactions as much.

The two work on an ortho case together in episode 6, “Flowers Grow Out of My Grave.” Nico again asks Levi to go for a drink and Levi again turns him down. Nico guesses that Levi has a date, which the intern denies. Nico then asks if Levi has a boyfriend and he’s surprised, having never identified as gay before. When he asks Nico the same question, Nico tells him that fellowship years are “a relationship killer.”

Later, the two end up together on an elevator and kiss. Nico apologies, but Levi admits that it was perfect. In some strange analogy, Levi says that today had been his doing ortho and he really liked it, despite having been more focused on general surgery.

Nico reads between the lines and figures out that their kiss was Levi’s first kiss with a man. He’s clearly shook by this, openly admitting that he’d never have kissed Levi if he’d known.

In what I’m assuming is fuelled by a coming-out story we’ve yet to learn about Nico, he tells Levi that he can’t teach him how to be gay.

Levi yells after him, “I thought this was a teaching hospital!”

We’re finally at the fall finale, “Blowin’ in the Wind,” and Grey Sloan is inundated with patients because of a massive windstorm that’s pummelling Seattle.

With all hands on deck, Bailey (Chandra Wilson) assigns Levi to the clinic to assist Nico in clearing out the patients.

As was to be expected, the two argue a bit in the clinic. Eventually, Nico leaves, having to travel through the ambulance bay which has now become a dangerous wind tunnel from the storm because of the Venturi effect.

After returning to the clinic, Levi tells Nico there are no more patients, to which Nico replies that he wanted to make sure Levi got back okay. Levi, however, isn’t quite as reckless. Recognizing the dangers of being outside, he tells Nico he’d rather stay put until the storm passes.

Nico then apologizes for the kiss in the elevator and Levi tells him he’s an ass. Frustrated, Nico tells him that the drama is exactly what he wanted to avoid, that he doesn’t need “the shame spiral.”

Levi tells Nico that he is the drama. And despite his warnings about going outside, Nico leaves. The moment he steps outside, he’s blown away and slammed into an ambulance.

Bravely, Levi crawls over to him and helps his fellow doctor into the ambulance. Once inside, Levi tells him “you’re welcome.”

Alone in the while they wait out the storm, Nico notices Levi lost his glasses outside, to which Levi tells him that it’s his fault. The other thing that’s his fault is Nico thinking Levi was in a shame spiral. There’s then a long monologue about his life in college and how his nerdy lifestyle meant that sex was off the table — with guys and girls. He admits that he’d had feeling for men before, but that he never understood them — not until Nico kissed him. The kiss made him feel the opposite of shame.

Nico leans in and kisses him again.

A little while later, we return to the ambulance, where Nico and Levi are now in the throngs of their undeniable attraction for each other. Both have their scrub tops off and Levi is straddling Nico’s lap.

All this while the storm outside continues to rage and an electrical pole collapses in the ambulance bay.